Home
/
American History
/
The song (like the flag) is still there

The story of how The Star-Spangled Banner became America’s national anthem and what took Congress so long to designate it as such is a fascinating tale that reflects the give and take between the rulers and their subjects over national symbols, the symbiotic relationship between patriotism and religion, and the song’s adoption and adaptation by Americans of all political persuasions. Akin to the flag lionized by Francis Scott Key, the song is “still there” and will be for a long time because—like the Fourth of July, Flag Day, and other national holidays—it reflects the people’s will. 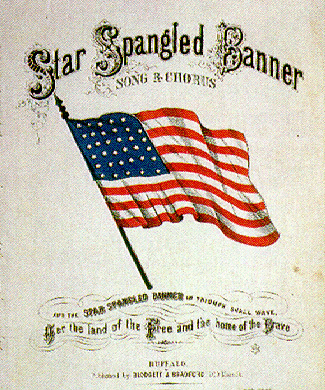 Yet, there are occasional rumblings over the song. Many Americans complain about its melodic leaps, for example, though its range is the same as Silent Night (and when was the last time anyone complained about that Christmas chestnut?). America the Beautiful also contains an awkward jump in the chorus (at the first iteration of “America”), yet it has been a popular rival to The Star-Spangled Banner.

It’s worth remembering that the anthem never would have taken hold if ordinary Americans had trouble singing it during the 1800’s. The melody Key consciously borrowed, To Anacreon in Heaven, served as the bedrock for more than 80 other popular ditties from the late 1700’s through 1820. One of the reasons why The Star-Spangled Banner has fended off all challenges, in fact, is its distinctive melodic edge, which is lacking in other anthem alternatives, including Hail, Columbia, popular in the nineteenth century. Over the years, several campaigns have attempted to dislodge The Star-Spangled Banner from its official status, either by holding anthem contests or attempting to promote alternatives such as America the Beautiful and God Bless America. Both of these came too late to the party and suffered from serious limitations, including challenging, dated melodies and stilted, sometimes unmemorable words.

Despite the anthem’s familiarity, Americans do seem to have a hard time remembering the words to even the first verse (and there are four!). Perhaps people had better memories in the early 1800’s, since renditions of the anthem in that era routinely included all the words. In one joke that circulated during World War I, a solder returning from patrol in enemy territory encounters a checkpoint. The guard asks, “Who goes there?” The solder replies, “An American.” The sentinel responds, “Then recite the first verse of The Star-Spangled Banner.” The soldier answers, “I can’t remember it.” To that, the guard says, “Then pass, American.”

After the battle in Baltimore harbor in September 1814, the culmination of the War of 1812, the song spread rapidly, first by word of mouth and then in print (often without musical notation). The conflict represented a serious crisis to the country’s sovereignty and the outcome remained in doubt until Baltimoreans repulsed the British. Key captured the relief felt by many Americans, and his words served as a journalistic answer to the question, “What happened in Baltimore?”

Yet, over the years, his lyrics have also come under fire for being militaristic, even though Key merely related what he witnessed. If Americans still sang the fourth verse, they would know that Key, a pacifist who took up arms against England in 1814, reluctantly sanctioned war by writing “then conquer we must, when our cause it is just.” He also sought the approval of a higher power and devised a phrase that inspired the country’s official slogan: “And this be our motto ‘In God is Our Trust’” (parsed to “In God We Trust” and adopted by Congress in 1956).

Perhaps all the complaints simply reflect complacency, since the anthem is performed so often at ballgames, flag-raisings, school assemblies, and civic events. Yet one of the most chilling renditions of the song took place just last year, at the first Boston Bruins game after the marathon bombings. Singer Rene Rancourt started the song off, then stopped singing after a few bars and waved his microphone like a conductor’s wand. The crowd bellowed a moving and heartfelt version, proving that a determined group of randomly assembled Americans can indeed sing their anthem with emotion and purpose—if they want to.

Marc Ferris earned an M.A. in history from the University of Massachusetts at Amherst. His work has appeared in the New York Times, Newsday, Time Out New York, Spin, Vibe, and elsewhere.  His book, Star-Spangled Banner: The Unlikely Story of America’s National Anthem, will be published by JHU Press in September.