The damage in 2008 to the LHC was considerable, requiring tens of millions of dollars and a year to repair. Yet now, in the fullness of time, we see that this incident was merely a speed bump in the history of the LHC. The LHC’s role in the 2013 Nobel Prize in physics was the first such prize, but probably not the last.

Well, time, which is measured in microseconds at this point, moved on. The spark jumped from copper conductor to copper conductor, causing copper atoms to be knocked off into the vacuum. As the amount of copper vapor grew, the vacuum became less of an insulator and more conductive, letting more electricity flow. That’s when things began to get interesting. Like opening a faucet completely, the trickle of the initial spark grew until it became a torrent of electricity: ten thousand amperes, enough to simultaneously start thirty or so cars in the dead of winter. The onslaught of electricity was enough to melt a chunk of copper the size an adult fist. This would be bad, but, if you will excuse the pun, things were just beginning to heat up.

The tipping point from annoying incident to serious disaster occurred when the heat from the electrical arc punctured the volume filled with the liquid helium used to cool the Large Hadron Collider magnets to more than 450° Farenheit below zero. Luckily, helium is an inert gas, so an explosion in the usual sense of the word was impossible. However, the helium was in liquid form, and when it encountered more ordinary temperatures, it boiled and turned into gas. When any liquid turns to gas at atmospheric temperature, it expands in volume to 700 times its ordinary size. And the LHC magnets contain an awful lot of helium . . . as in 96 tons of helium. (Although, in the end, only six tons were released.)

As the helium vented from the storage volume, it jetted out with tremendous force. And by “tremendous force,” I mean enough force to move a 50-foot-long magnet weighing 35 tons and anchored to the concrete floor about two feet. As the helium gas expanded in the LHC tunnel, it pushed air out of the way. The boundary between an environment containing ordinary air and one containing only helium moved up the tunnel at incredible speed. It was possible for a human to outrun the helium monster, but only if the person could run a four-minute mile. Run any slower, and you would be overtaken by helium. Soon, you would fall down and die, suffocated by lack of oxygen.

Luckily, there was nobody near the punctured helium volume to be in danger. Actually, luck had nothing to do with it. The CERN (European Organization for Nuclear Research) safety professionals were aware of the danger of a catastrophic failure. Although such an incident was extremely unlikely, people are allowed in the Large Hadron Collider tunnel only rarely. If they are allowed inside, they must have special training and carry oxygen tanks and protective clothing. In this case, however, the nearest CERN personnel were miles away from the incident, and even the civilians who lived above the LHC were separated by at least 300 feet of solid rock. No people were ever in danger.

I was in the United States on the day in September 2008 when the LHC broke. My colleagues and I were getting reports second-hand, and I remember well the group sitting around a table, looking shell-shocked, and asking each other, “How bad can it be?”

So now, in the fullness of time, we can answer that question. How bad was it? Pretty bad. Repairing the LHC cost tens of millions of dollars and took about a year. In the end, fifty-three magnets, each fifty feet long and weighing thirty-five tons, needed to be removed, repaired, cleaned, and replaced. While the true damage was relatively localized, among the collateral damage was a breeching of the LHC’s beam pipe, into which soot and debris spread for a mile or so. The technicians were busy.

It is now six years later, and perhaps it is time for a broader viewpoint. Yes, the damage was grave, and yes, it took a year to repair. However, the repair costs were about two percent the cost of the entire LHC, and the delay was only about five percent of the schedule. Granted, if you were a graduate student who was hoping to graduate on the first year’s data, the incident was an awful delay. However, now, in 2014, what was the real consequence? Well, we now have an accelerator that is better instrumented against similar incidents. The damage of 2008 won’t occur again. We have studied billions of particle collisions and begun to explore the behavior of matter under conditions never before possible. We have discovered the Higgs boson and facilitated a Nobel Prize in physics. There have been some considerable successes, and the debacle of 2008 is now fading into distant memory.

It’s all a matter of perspective. And, let us not forget, the data of 2015 beckons alluringly. Soon the universe will give up some more of her mysteries and scientists will do what they have for millennia: they will take up their pens and begin writing a new page in the book of knowledge, a book whose first pages were penned over two thousand years ago. 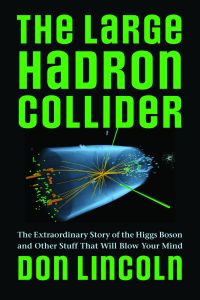 Don Lincoln is a senior scientist at Fermi National Accelerator Laboratory and an adjunct professor of physics at the University of Notre Dame. He is the author of The Large Hadron Collider: The Extraordinary Story of the Higgs Boson and Other Stuff That Will Blow Your Mind, Alien Universe: Extraterrestrials in Our Minds and in the Cosmos, and The Quantum Frontier: The Large Hadron Collider, all published by Johns Hopkins.