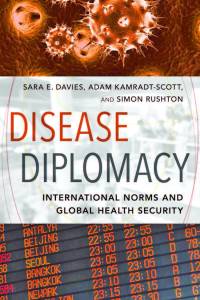 The worst Ebola outbreak in history began in Guinea in December 2013 before spreading to Liberia and Sierra Leone in March 2014, with sporadic cases of infection in Mali, Nigeria, and Senegal. At least 10,000 people have now died from the disease. The U.S. Centers for Disease Control (CDC) estimates that earlier intervention could have prevented the disease’s spread, leaving fewer than 5,000 people dead. Understandably, there is much debate about the performance of the World Health Organization (WHO).

Critics ask why, given Ebola’s high mortality rate and the fact the outbreak occurred in chronically poor countries with weak health systems and histories of unstable governance, the WHO did not raise the alarm earlier than it did. In March 2014, when the outbreak was in Guinea and there were reports the disease had spread to Sierra Leone and Liberia, the WHO Director-General chose to not convene an emergency committee to determine whether the outbreak constituted a potential public health emergency of international concern (PHEIC), as allowed by the International Health Regulations (IHR).

Since 1951, the International Health Regulations (originally named the International Sanitary Convention) had been the major international framework regulating the required response of WHO and its member states to specific disease outbreaks, specifically plague, cholera, yellow fever, and, until 1981, smallpox until 1981. The IHR were substantially revised in 2005 to strengthen the WHO’s ability to respond to epidemic-prone diseases, food-borne diseases, accidental and deliberate outbreaks, toxic chemical and nuclear accidents, and environmental disasters that “pose a threat to international public health security.” The revised IHR set reporting and verification timelines for outbreak events, permitted the WHO to receive outbreak reports from non-state “unofficial” sources, and provided for the human rights of infected people. The new IHRs shifted the focus of the WHO’s approach to infectious disease in three ways: from control at borders to containment at source; from a limited number of diseases to all public health threats; from preset measures to adapted responses. A key part of the framework is the decision of the WHO Director-General to refer an outbreak event to a specially convened IHR Emergency Committee to determine whether the outbreak event constitutes a PHEIC demanding a range of exceptional measures.

As the Ebola outbreak spread in March through June 2014, WHO officials were aware of the outbreak, knew which countries were affected, and were conscious of the problems associated with them. Yet no emergency committee was convened until early August, when the first case was reported in Nigeria. A PHEIC was declared by the IHR emergency committee on 8 August. The further spread of the virus to Senegal in early September, coupled with the dramatic rise of infections and deaths in Liberia and Sierra Leone, prompted the UN Security Council to issue a landmark resolution on 18 September establishing the UN Mission for Emergency Ebola Response (UNMEER). Secretary-General Ban Ki-Moon said the resolution signaled the “gravity and scale of the situation now requires a level of international action unprecedented for an emergency.”

Why was the WHO so slow to act? Some blame tensions between WHO headquarters in Geneva and its regional offices in West Africa. The WHO’s decentralized design certainly creates inefficiencies and divisions within the organization. But there is little direct evidence to suggest that these divisions caused the WHO’s slowness. There were other practicalities that would have hampered the response irrespective, even had the organization declared a PHEIC earlier. In particular, the WHO confronted a budget and staffing emergency, having lost a third of its budget to cuts in 2012–2013. Despite the PHEIC announcement in early August, donor funding did not escalate until after the Security Council resolution in September.

How, then, should the Ebola outbreak be viewed against the standards set by the IHR in 2005?

Our book, Disease Diplomacy: International Norms and Global Health Security, explores the IHR revisions and the WHO’s efforts to promote new behavioral standards for states in dealing with disease outbreaks. There are three main “take home” messages from the book that foretold the difficulties WHO and affected member states would face with an outbreak such as Ebola:

The revised IHR was a technical and political achievement for WHO and member states. The lesson from Ebola is to return to the content of the instrument to evaluate how to better prepare states and the WHO for the next outbreak.

Sara E. Davies is an Australian Research Council Future Fellow at Queensland University of Technology’s Australian Centre for Health Law Research. She is the program director of the Prevention of Genocide and Mass Atrocities Program at the University of Queensland’s Asia-Pacific Centre for the Responsibility to Protect. She is the coauthor with Adam Kamradt-Scott and Simon Rushton of Disease Diplomacy: International Norms and Global Health Security.