Nine essays and a roundtable discussion provided the content for the recent special issue of Feminist Formations on “Institutional Feelings: Practicing Women’s Studies in the Corporate University.” The issue sought to give women’s studies practitioners a chance to analyze, document, and theorize on this moment in women’s studies’ history. Guest editors Jennifer C. Nash and Emily A. Owens joined us for a Q&A about the special issue.

How did this special issue come together? 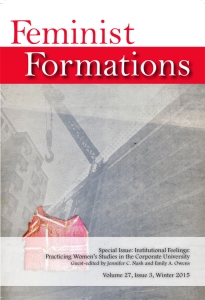 We are both scholars with intellectual, political, and pedagogical investments in women’s studies.  We have also come of age – in many ways – in the discipline (we both pursued undergraduate degrees in the field; Emily pursued a secondary field in Women’s, Gender, and Sexuality Studies in graduate school, Jennifer teaches in a Women’s Studies program)  and we have watched the discipline change, evolve, and morph. Here, we are talking not simply about the “name changes” that many programs and departments went through in the 1990’s, name changes which purportedly signaled the field’s expansiveness and inclusivity. We are talking about other changes as well – the emergence of graduate certificate programs, the push toward women’s studies’ departmental status, the adoption of intersectionality as the field’s core analytic, to name a few. We were interested in thinking about these developments alongside the changes in the university that some have described as the “corporatization” of the university.  How has a relatively precarious space like women’s studies navigated its institutional precarity? How do we understand the field’s will-to-institutionalization? How might we theorize the simultaneous pleasure and violence of institutionalization? What are the particular forms that feminist institutionalization takes?

How important was it for you to hunt for deeper questions in this area?

It was extremely important to us to incorporate a sense of complexity around the practice of women’s studies in this moment. Pleasure features centrally in both of our first projects, and through that work we have learned about the complexities of pleasure—the ways that pleasure can, and often does, intersect with negative affective experiences like pain, trauma, violence. We wanted this special issue to capture the affective range, and contradictions, that are part of practicing women’s studies in the now. A central concern of the special issue is the “partial institutionalization” of women’s studies, which we use to try to capture the kind of in-between-ness of the interdiscipline. It is at once a site of liberation, of community, of belonging, and of normative notions of institutional progress and success, but it is also fraught—a site of outside-ness, of complex politics of race and sexuality, or national boundaries. We knew the questions in this issue would be more fruitful if they could get at all of that, instead of writing a simple narrative of triumph or decline.

How important was the collaboration that developed from the people involved in this issue?

We were so impressed by, and maybe also a little surprised by, the extent to which collaboration became a central part of this special issue. The issue includes many collaboratively written manuscripts, which experiment with traditional forms of academic writing. This allowed us to bring many perspectives into the issue, and also meant that, in the case of some articles, voice could shift to include both scholarly prose and more a conversational tone. This brought variety to the issue in exciting ways. We also facilitated the graduate student roundtable in this issue as a collaborative space, because it was important to us to have graduate student perspectives in the volume; the roundtable was shared across the group several times, which lent a conversational aspect to the piece.

On that note, our own collaboration has been a really important part of this project. This project came together through daily emails, phone calls, Skype dates; through cross-rank co-operation; through co-writing and intellectual generosity; and through friendship. In the midst of considering the challenges associated with doing women’s studies in this moment, our own collaboration became a sort of beacon that pushed back against the isolation and outside-ness that can mark the experiences of feminist intellectuals in the academy. Collaboration, then, is not coincidental to this issue, but is part of the methodology of this project.

What did you learn about the variety of experiences from contributing authors?

We often imagined the articles in the special issue to provide a kind of “thick description” (to borrow from Geertz) of institutional life in women’s studies, to offer ethnographic richness about the daily practice of feminist work – teaching, research, mentoring, administration. The articles in the volume cover a lot of terrain including intersectionality and its discontents, the politics of diversity, the place of adjunct labor in women’s studies, the racial and sexual politics of the classroom, and the like.  The wide array of questions that the issue takes on reveal, we think, how profoundly the question of institutionalization is shaping feminist academic life.

What kind of reaction do you hope to get from this issue?

We hope to spark critical conversations about institutionalization that move beyond either lamenting the violence of institutionalization or celebrating the field’s imagined resistance, and that instead contend with our complicated partial institutionalization and the varieties of feelings it engenders.  We aspire to foreground the affective life of institutionalization, underscoring how it works on our bodies; our conceptions of our selves; and our relationships to our work, our colleagues, our students.  We think that this approach – one that is interested in how institutional life feels – will help those of us who labor in the field think about women’s studies peculiar location in the academy, and feminist scholars’ peculiar location in the academy – with new complexity.  Finally, we are both excited by the volume of collaborative work that the issue yielded.  We see collaboration as a practice of radical friendship and feminist camaraderie that challenges the ethics of competition and scarcity that mark the contemporary academy.