To serious scholars, students, and aficionados of American poetry, Hart Crane needs no introduction. A controversial and troubled figure, Crane was born in 1899 to the inventor of Life Savers candy and killed himself in 1933 by jumping off a steamship into the Gulf of Mexico. His tragic and beautiful work profoundly influenced and inspired poets such as Edmund Wilson, Robert Lowell, and William Carlos Williams. 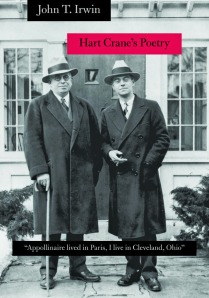 Crane’s Poetry: “Appollinaire lived in Paris, I live in Cleveland, Ohio”. Harold Bloom credits Irwin’s book with defeating the “dark failure” of critics to understand Crane, Langdon Hammer celebrates it as “an event in Crane criticism,” and Paul Mariani calls it “a gift.” Tomorrow, actor James Franco will join Irwin and Linda DeLibero (director of the JHU Program in Film and Media Studies) for a special screening and discussion of the actor’s own stab at making sense of Crane, the biopic The Broken Tower.

Based on Mariani’s biography of Crane, The Broken Tower, Franco’s 90-minute film was shot in black and white and completed in 2011. It debuted last year at Boston College, was screened at the 2011 LA Film Festival, and is slated for theatrical release later this year. But all you have to do to catch a prerelease look at the  movie is get to Shriver Hall on the JHU Homewood campus (D3 on the map at the link) by 2 p.m. tomorrow and have a seat. We, that is the JHU Press, together with the university’s Writing Seminars and its Program in Film and Media Studies, will do the rest. Along with professors Irwin and DeLibero and Mr. Franco, of course.