We asked Professor Michael C. C. Adams to select some archival images to represent each chapter of his latest book, Living Hell: The Dark Side of the Civil War. Professor Adams’ explanation of each picture and its significance follows.

Living Hell, Chapter One: Gone for a Soldier
Bucking and gagging or crucifixion on a spare artillery wheel appear to be harsh punishments, but were common for serious military offenses such as theft, drunkenness, or rank insubordination. Regular officers, in particular, used severe measures, including flogging and execution, to control ill-disciplined citizen soldiers. These sketches are by Charles Reed, a Civil War veteran; they appeared in Hard Tack and Coffee: The Unwritten Story of Army Life , an 1887 memoir written by John D. Billings of the 10th Massachusetts Volunteer Artillery. Although a Congressional Medal of Honor winner, Billings didn’ t flinch from confronting the dark side of soldiering. I talk more about punishments and adjustment to army life in the first chapter of Living Hell. 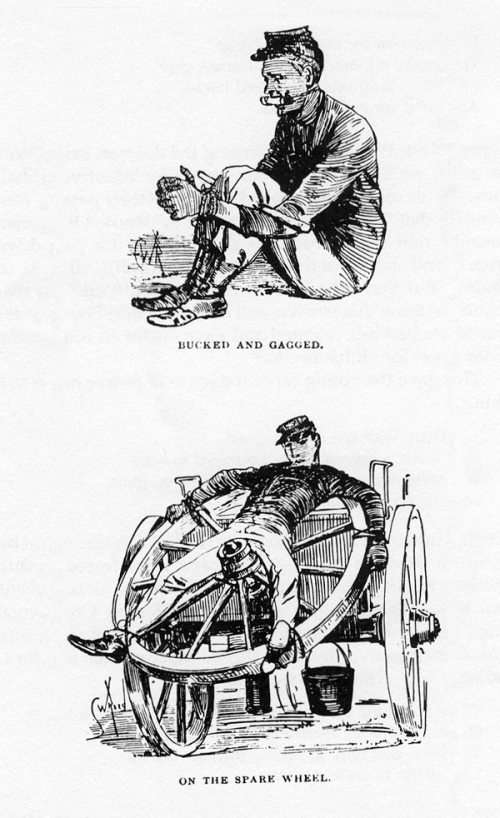 Living Hell, Chapter Two: On the March
This sketch of soldiers wading through mud accompanied the text of the 1906 memoir The Young Soldier, which was written by Joseph E. Crowell of the 13th New Jersey Volunteers. Dust, mud, and lack of water to wash made soldiers miserable, then as now. Some vets said being filthy was worse than fighting. But mud was also a vector for diseases that entered the host body through cuts, sores, and abrasions. I look more at the health hazards faced by soldiers tenting in the field as part of Chapter Two of Living Hell.

Living Hell, Chapter Three: Close Order Combat
This soldier from Confederate General Richard S. Ewell’s Corps, killed in heavy Virginia Wilderness fighting in May 1864, had not been dead long enough to bloat when this photograph was taken by a Mathew Brady cameraman (the photograph is now in the Library of Congress collection). The victim was hit in the shoulder by a rifle round (lead “minnie” balls inflicted deep, gouging wounds). As he is soaked in blood to the waistline, we may conjecture that he bled to death before help could reach him. I examine Civil War weapons, tactics, and the lethal destruction they caused in Chapter Three of Living Hell.

In this sketch, now in the Library of Congress, field artist Alfred R. Waud showed infantry trying to carry a wounded man to safety using a makeshift stretcher during the Virginia Wilderness fighting of May 1864. Burning to death was a terrible fate dreaded by men on both sides, including General William T. Sherman, who witnessed the horror at Shiloh in April 1862. Survivors said the cries of those roasting haunted their dreams for decades. Cartridge boxes exploding with the heat added to the agony of victims, I discuss the plight of the wounded, along with the problems of burying the thousands of corpses from major battles, in Chapter Four of Living Hell.

Field artist Alfred R. Waud drew this “straggler” from life, one of the many thousands who hung around the peripheries of the armies, often preying on civilians to stay alive. A Victorian would likely see here a coward who had “lost his character.” With the benefit of later scientific insights, we might diagnose over-exposure to the elements and to combat, producing emotional demoralization and probable degeneration of the immune system. I examine all aspects of psychological wounds, including shell shock or traumatic brain damage, combat exhaustion, dissociation, and post traumatic stress disorder, in Chapter Five of Living Hell.

Civilians suffered drastic physical deprivations through economic shortages, loss of homes, and the absence of breadwinners. They also bore grievous personal losses in the deaths and injuries of loved ones, along with chronic dislocation to their lives, especially if trapped in a war zone. In this sketch by artist Francis H. Schell for Frank Leslie’s Illustrated Newspaper, farmers who had evacuated Sharpsburg, Maryland, return to their lands on September 19, 1862, after the bloody battle of Antietam. They stare in horrified fascination at the grotesque corpses, some of the many not yet buried. I describe civilian struggles to cope with wartime traumas in Chapter Six of Living Hell.

It is conventional to label the sectional conflict a “brothers’ war,” which in some ways it was, dividing families, communities, and states. But, viewed from a different perspective, this was a “strangers’ war.” Most people on either side knew very little about their enemy and filled this knowledge gap with negative caricatures that demonized the “alien other” as cruel and fiendish. Dark stereotypes helped to make the latter stages of the fighting cruel and merciless, as the conflict descended into total war. Regional stereotypes were common even before the firing began. This editorial cartoon in Harper’s Weekly (New York, 1860) depicts a Southern militiaman: scruffy, out at the knee, bristling with weapons (including the murderous bowie knife and tomahawk), he clutches a lynching rope. I discuss mutual hatreds and the savagery generated by war psychosis in Chapter Seven of Living Hell.

Devastation to Richmond, Virginia, as captured in this spring 1865 photograph (now in the Library of Congress), suggests the ruin inflicted on the war’s losers. Sections of the South had not recovered a century later. Not all on the winning side prospered either. African Americans saw their fragile hold on full citizenship eroded by legal chicanery and physical intimidation. Women, who thought their contributions to the war effort would net them full civic equality, had to wait until 1920 for the right to vote in federal elections. Union workers, who had seen this as a people’s war, were also disappointed as big business, in league with government, became the most powerful voice in national affairs. I discuss the lasting legacies of the war in chapter eight of Living Hell. 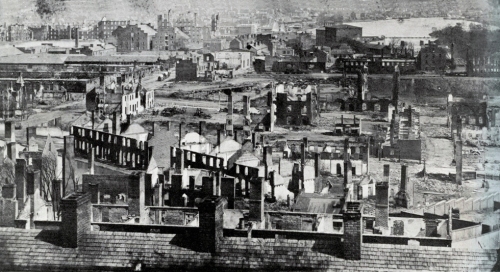 Living Hell: General Lee and the Gray Ladies
The soldier pictured on the cover of Living Hell (from the Library of Congress collection), lying shot through the forehead in a Petersburg, Virginia, trench, early 1865, reminds us of the war’s pathos. Young and handsome, he had his hair cropped recently to deter lice, fleas, and ticks, the unwelcome companions of field life. In an act that must still provoke unease in the viewer, the photographer has posed the body and attendant props (muskets) to create a romantically Gothic effect. The boy is one of the numberless, nameless thousands who died anonymous deaths on fields far from home. I try to capture the lasting emotional emptiness of civilians left to grieve the missing in the Closing to Living Hell.

Michael C. C. Adams, Regents Professor of History Emeritus, University of Northern Kentucky, is the author of Living Hell: The Dark Side of the Civil War and The Best War Ever: America and World War II, both published by Johns Hopkins. To hear Michael Adams talk about Living Hell with Abraham Lincoln Book Shop during a Virtual Book Signing™ click here.