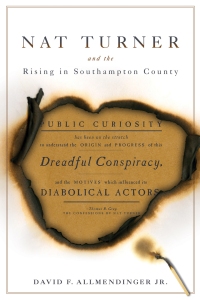 In August 1831, in Southampton County, Virginia, Nat Turner led a bloody uprising that took the lives of some fifty-five white people—men, women, and children—shocking the South. Nearly as many black people perished in the rebellion and its aftermath. Our recent book by David F. Allmendinger Jr. presents important new evidence about the violence and the community in which it took place, shedding light on the insurgents and victims and reinterpreting the most important account of that event, The Confessions of Nat Turner.  Throughout Black History Month, we will offer a series of excerpts from recent publications, and today we are pleased to begin with Allmendinger’s thoughtful look at this history in Nat Turner and the Rising in Southampton County.

From Chapter One: A History of Motives

“I must go back to the days of my infancy, and even before I was born.” —Nat Turner, The Confessions of Nat Turner

Of all the accounts that appeared in 1831, only the memoir within The Confessions of Nat Turner advanced the notion that the rebellion leader’s motives had a history. No previous account had linked so many events in Nat Turner’s life to specific points in the past: 2 October 1800; the year 1803 or 1804; around 1809; about 1821; exactly 1825; around 1826; 12 May 1828; and early 1830. The level of detail in itself suggested authenticity. Not every incident was dated or placed in proper sequence, but an emphasis on the importance of time infused the account and the sensibility that produced it.

Turner dictated this portion of his confession in the jail on 1 November, during his first long interview with Thomas R. Gray. In the pamphlet’s introduction, Gray claimed that the prisoner had spoken voluntarily, even expansively. He claimed, moreover, to have recorded the statement in Turner’s voice (except for material in parentheses, footnotes, or clearly marked exchanges) “with little or no variation from his own words.” But Gray was a novice at such devices. He intruded as early as the fourth sentence of the memoir, coloring the prisoner’s remarks about the “enthusiasm” that had “terminated so fatally to many,” for which he, the prisoner, was about to “atone at the gallows.” The intrusions raised doubt. And there were other difficulties: Gray was the sole witness to the statement and the sole keeper of the document, much of whose content would prove difficult to verify; by late November, when The Confessions of Nat Turner was published, the source had been hanged. Still, there are signs that Gray managed to convey more fully than he realized the substance of what the chief insurgent said.

The account begins with a stilted salutation. “Sir,” says the prisoner, “You have asked me to give a history of the motives which induced me to undertake the late insurrection, as you call it—To do so I must go back to the days of my infancy, and even before I was born.” In that voice, according to the only record of what was said, Turner commenced a review of events that had occurred long before August 1831. The memoir proper, 2,055 words in length, covered five full pages in the original pamphlet. Turner told Gray he had been born “the property of Benj. Turner of this county,” and that he was thirty-one years old on 2 October, thereby establishing the year of his birth. His father, mother, and grandmother (whose names he did not provide) appeared in his earliest memories of childhood, when all three had lived at Benjamin Turner’s plantation, before his father ran away. Nat Turner recalled three incidents that must have occurred between 1803 and 1808 at his master’s house in the Cross Keys neighborhood of St. Luke’s Parish. Together, these incidents gave rise at the time to a belief that he was exceptional, destined for “some great purpose,” he said, and later to a feeling that destiny had been thwarted.

The germ of rebellion had formed by his twenty- first year. The memoir’s  account of its origin came to this: Turner once had believed that because of his unusual intelligence his masters might offer him special treatment, perhaps in the form of freedom, which would lead to some great purpose. In time, his masters proved disappointing.

David F. Allmendinger Jr. is professor emeritus of history at the University of Delaware. He is the author of Paupers and Scholars: The Transformation of Student Life in Nineteenth-Century New England and Ruffin: Family and Reform in the Old South.