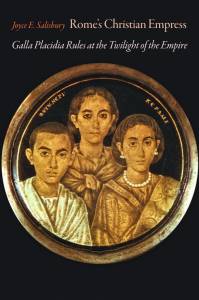 Mother’s Day can often bring many mixed emotions—at least for me. As a daughter, when my mother was alive, I used Mother’s Day to reflect on how I measured up to my mother’s model of integrity (not so much) and made resolutions (usually broken) to call more often. As a mother, I worry about what kind of role model I have been and continue to be, and really, whose turn is it to call? As everyone knows, family relationships are complicated, and celebrations like Mother’s Day remind us of that.

As I was writing Rome’s Christian Empress, I had to think a lot about the relationship between Mothers and children—particularly daughters. The eponymous empress, Galla Placidia, grew up amidst turbulent family politics (typical for Roman ruling families), but she had an image of herself as an empress—not as a princess. What gave her this vision of herself? In part, it was the coins she held. Her family— the Theodosian—struck coins showing some of their women as fully empress. The image below shows the gold solidus of Placidia’s sister-in-law, Eudoxia. The empress is shown with the imperial robes and military cloak worn by the male emperors. The hand of God above her head claims that she rules because God had chosen the House of Theodosius to rule the empire and bring Christianity to power.

Placidia, too, had the blood of Theodosius in her veins, so she too could rule by the grace of God. And she wanted to be fully empress—military cloak, power, and all. So she spent her life accomplishing this goal. If she had to participate in the killing of her own stepmother to do so, so be it! The lesson of the power of monetary images is not lost on modern advocates of putting a woman on the twenty-dollar bill! Placidia would have approved (and so do I).

Placidia was also a model for her daughter, and here is where we learn that the examples we give are not always the lessons our daughters learn. Placidia’s first attempt at displacing her brother as emperor came when she married a Gothic barbarian, Athaulf. When her daughter Honoria wanted to carve an empire for herself to challenge her own brother Valentinian, she too looked for a powerful barbarian. She sent her ring and proposed marriage to the empire’s greatest enemy, Attila the Hun. Of course, her mother was horrified—a polygamous pagan invader was not the same as a bright Goth in the prime of his life. But, as all mothers know, we don’t get to choose the lessons our daughters learn!

On this Mother’s Day, I offer the tale of this fifth-century ruling Roman family. The cover of my book shows a rare portrait of an ancient family commissioned by Placidia. It shows the Empress herself (in pearls) with her rebellious daughter, Honoria, and her son, the Emperor Valentinian, whose recklessness contributed to the fall of the Roman Empire in the West. Luckily, Placidia died a contented mother, as she wrote, “forever empress,” leaving her son secure on the throne. It was only after her death that things fell apart, so on this Mother’s Day I shall drink a toast to this successful ancient mother/empress.

Joyce E. Salisbury is professor emeritus of history at the University of Wisconsin–Green Bay. She is the author of Rome’s Christian Empress: Galla Placidia Rules at the Twilight of the Empire, Perpetua’s Passion: Death and Memory of a Young Roman Woman, and The Beast Within: Animals in the Middle Ages.