In 2014, Social Research entered its eightieth year of continuous publication, and this year I entered my forty-fifth year of editing the journal. One anniversary is public, the other is personal. Both seem remarkable.

Founded as the journal of the University in Exile, which in 1934 was accredited as the Graduate Faculty of Political and Social Science at the New School for Social Research, Social Research has been concerned with the relationship between theory and practice and, more simply, with the intersection between political and social issues and the academic enterprise. While the papers in each issue are largely written by people within the academy, the subjects explored have been chosen because of their relevance to our political and social lives—not because of their relevance to the arcane subjects that are often the focus of heated academic debate. 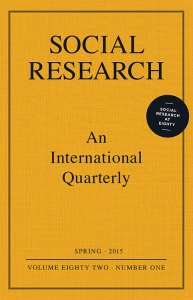 Looking through the early issues of the journal, it is clear that while they were not thematic, as almost all issues have been since around 1975, their focus was on the economic and political questions that arose during the Second World War and the post-war period. Those early issues were mainly authored by the predominantly European founding members of the University in Exile and the early Graduate Faculty, many of whom had played some role in political affairs in Europe prior to the war and in the United States after coming here, such as Hans Speier, whose brief biography (like those of all the authors whose work is republished here) appears at the end of this issue. This explains, at least in part, why the journal was so deeply engaged with concerns outside the academy.

That focus began to shift in the 1950s. Fewer and fewer Social Research authors were members of the Graduate Faculty of the New School, and the center of gravity of the articles that appeared veered away from political problems of the moment and toward more sociological questions. Not surprisingly, that shift largely coincided with the retirement and death of the journal’s founders.

As an inexperienced editor, I was faced in 1970 with whether to keep up the profile Social Research had developed by then, as more or less a journal of sociology, or try a different path that might nevertheless maintain a connection with the journal’s roots. I chose the latter path, and within a few years had moved from issues that were primarily miscellanies of essays to ones that were entirely thematic and for which all the papers were invited. The themes varied widely, from “The Religious-Secular Divide,” “Courage,” “Boredom” and “Is Peace Possible?” to “Happiness,” “Shame,” “Hope and Despair,” “Punishment,” “International Justice” and “The Limits of Knowledge.”

In 1988 we initiated an ongoing series that addressed transitions to democracy around the world, beginning with several issues on East and Central Europe after the collapse of the Berlin Wall and continuing with issues on South Africa, China, Iran, India, and Egypt, to name just a few. This is another way in which Social Research has kept faith with its roots. We continue to seek out authors not only from Europe but other parts of the world as well in an effort to prevent too provincial a focus and to try to maintain the international strengths of the early issues.

Also in 1988, the first Social Research conference took place. Entitled “In Time of Plague: The History and Social Consequences of Lethal Epidemic Diseases,” it inaugurated in what became the Social Research Conference Series at the New School. The thirty-second conference in the series, “Fear of Art,” took place earlier this year. The papers from each conference are published as special issues of the journal. These public conferences have immensely increased the journal’s outreach because they usually attract large audiences, both in person and online, and have considerably amplified our mission to bring scholarship to bear on the urgent political and social issues of our time.

Even in these days in which small magazines and journals are suffering from the many changes in technology and the enormous proliferation of online publications, we believe we are looking forward to a robust future for Social Research, one that continues the mission of its founders by exploring the subjects and questions that emerge from the perplexing social and political issues of our times, which invariably have deep roots in the past that need to be remembered. We are, of course, grateful to our loyal readers and to the many authors who have written for the journal over these 80 years.