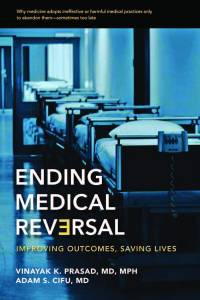 For doctors, it is common to have some doubt about a new medical test, procedure or drug—even one which is widely hailed as remarkable or a game changer. It is not cynicism but a healthy skepticism towards marketing over substance. Doctors want to see the evidence that a drug actually works rather than just a good story about why it should work.

Often, however, this skepticism does not last. After a few months, still without any evidence, the doctor finds herself buying in, just a little, to the hype. OK, let me just see what everyone is talking about, she thinks. She begins recommending the drug herself. She still thinks of herself as cautious and conservative—while her colleagues use the treatment widely, she thinks it has a more narrow and defined role. Probably the pill does not work for everyone, but in a select group of people.

A few more years go by, and she gets comfortable with the once-hyped treatment. She now knows how to manage its complications; she thinks she has a good sense of who it benefits; and she considers it a part of her practice.

Then, one day, she opens one of the nation’s top medical journals and discovers that the treatment she was once skeptical of, but slowly grew to accept, simply does not work. A well-done clinical trial, probably the one which should have been done before the treatment even came to market, compared the treatment to the prior therapy, and found no benefit.

Then a patient who is on the treatment comes to the doctor’s office and asks about something he read in the paper. “Look,” he says. “They say the drug just doesn’t work.” He is frustrated and angry but gives his doctor the benefit of the doubt. What exactly does she tell him?

Some may think this scenario is unusual in modern medicine, where drugs and devices are ensured to be safe and effective by the US Food and Drug Administration, but as practicing physicians and researchers, we have found that this story is common. We call this medical reversal, and we see it in the drugs, procedures, medical devices, and diagnostic tests that are used in medicine every day. Medical reversal happens when doctors accept new medical practices without clear evidence that they work. Then these practices are later overturned, shown to be no better—or maybe even revealed to be worse—than the practices they replaced.

The phenomenon of medical reversal is not limited to doctors. Many of us adopt treatments (vitamins, supplements, diets, exercise routines) only to find out later that they are do not deliver what they promise. In Ending Medical Reversal:Improving Outcomes, Saving Lives, we look to understand the problem of reversal by studying why it happens, when it happens, and how, just maybe, it might be lessened or stopped.

Vinayak K. Prasad, MD, MPH, is a practicing hematologist-oncologist and internal medicine physician at the National Cancer Institute. Adam S. Cifu, MD, is a professor of medicine at the University of Chicago. He is a practicing general internist, medical educator, and the coauthor of Symptom to Diagnosis: An Evidence-Based Guide. Their new book from Johns Hopkins, Ending Medical Reversal:Improving Outcomes, Saving Lives, will be published in October.

Read the authors’ articles on this topic in ScienceLife and JAMA-Internal Medicine.

Use promo code “HDPD” to receive a 30% discount when you order your pre-publication copy of Ending Medical Reversal.