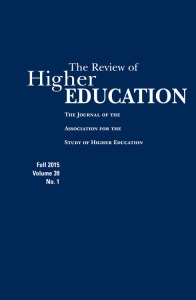 of The Review of Higher Education featured research from Julie J. Park and Ann H. Becks looking at who benefits from preparation for the SAT. Their research focuses on how high school resources are linked to participation in a variety of forms of SAT prep as well as the impact of SAT prep on SAT scores, both overall and for students of different races.

Park, an assistant professor in the Department of Counseling, Higher Education, and Special Education at the University of Maryland, College Park, and Becks, a research analyst at Human Capital Research Corporation in Evanston, Ill., participated in a Q&A about their article.

JHUP: What sparked the idea for this research?

JP:  I had done an article that looked at trends in SAT prep for Chinese and Korean Americans. While SAT prep is usually the domain of higher income students, some low-income Korean Americans take SAT prep at a relatively high rate, which is not due to anything related to “Asian values” but a complex interplay between the ethnic economy and social capital networks. I also had some interest in how high school contexts might influence pathways to college.

AB: Similar to Julie, I had an interest in issues related to the K-16 pipeline. This study was appealing in particular because of the attention it paid to the influence of the high school context on a measure of student performance that has historically held significant weight in academic profiles and admissions decisions.

JHUP: How important is it to study these issues even when some schools say they are de-emphasizing tests like the SAT and ACT in admissions?

JP:  I think it’s pretty important. Only a small percentage of schools have gone SAT-optional, even though it’s seen as one of the most effective ways to support diversity and equity in admissions. There are a lot of hot topic conversations around who should get into college and people will compare SAT scores like they’re apples to apples, not realizing that a supposedly objective test is shaped by a myriad of social factors.

AB: When you lessen the “weight” of or altogether do away with standardized test scores in admissions considerations you look towards other measures of academic profile such as high school grade point average and rank to get a sense of the applicant. But these two pieces of data mean less if an understanding of the larger context (e.g., “quality” of the high school) is not sought. In other words, as standardized test scores are de-emphasized admissions considerations will emphasize other student characteristics that may be a proxy for success in college such as goal orientation and grit. School-based and out-of-school–based resources can shape these things in students.

JHUP: What was the most surprising of your findings?

JP: I was surprised that only one form of test prep—taking a private SAT course—was linked with significantly higher scores. It was also interesting that East Asian Americans were the only group where a form of test prep (a private course) was linked with higher scores. This made me go back to the literature on the effects of SAT prep; somehow, I had initially missed that it was a lot more mixed than I had assumed. You assume that because it’s generally so expensive, that it has to work. The reality is more complicated and has a lot of implications for how we should be viewing students’ test scores.

AB: I was surprised by the opposing influence of some of the individual predictors when we tested the equality of beta coefficients. If anything these results raised more questions about the nature of the differences in the interplay between ethnic economies and social capital networks that Julie mentioned earlier.

JHUP: What do you hope happens from here in the realm of SAT prep research?

JB: There are more studies needed with new data from students taking the most revised form of the SAT. The survey that we used is the best one out there, but it’s old. There’s also a need for randomized controlled trials assessing the impact of SAT prep. Finally there’s more qualitative research to better understand the complexity of students’ experiences with the SAT and SAT prep.