In this seemingly endless presidential primary season, each and every candidate has claimed “outsider” status, and attacked nearly every other rival as a creature of the party “establishment.” No title or distinction – Senator, Governor, First Lady, Secretary of State, sibling/brother of former presidents, celebrity billionaire – has been too great to discourage presidential aspirants from presenting their campaigns as bold insurgencies against the complacency and corruption of the powers that be.

While there is nothing especially novel about such populist self-fashioning, the extraordinary volume of groaning about “the establishment” in this campaign cycle has led some political observers to ask if the establishment is in fact in decline. Are the elected officials, elites, big donors, and special interests that have traditionally steered the party nomination process losing their influence? Have new forms of social media and activism trumped (sorry for that) the conventional reliance on grassroots electioneering and penthouse fundraising? Can party structures no longer contain the intensifying anger wrought by “negative partisanship” – in which positive support for the principles and policies of a party weigh less in the mind of the voter than loathing for the other party and its partisans?

Needless to say, these questions will have to wait for answers. But in the meantime, we can entertain some historical analogies. One especially dramatic example of a party establishment defeated comes to us from the presidential election of 1824, when anger over the nomination process shattered the Democratic-Republican Party. During President James Monroe’s two terms in office (1817-1825), national party competition had all but disappeared. The Federalist Party, discredited by its seeming disloyalty during the War of 1812, had been reduced to a small band of New England reactionaries, leaving Democratic-Republicans as the only viable national party. While the absence of partisan competition may have allowed for a brief “era of good feelings,” one-party rule raised a number of thorny political and constitutional questions. A party congressional caucus had traditionally selected party nominees for President and Vice-President. But with only one party caucus remaining, the Democratic-Republican “King Caucus” now appeared to have the uncontested and arguably unconstitutional power to select Monroe’s successor. 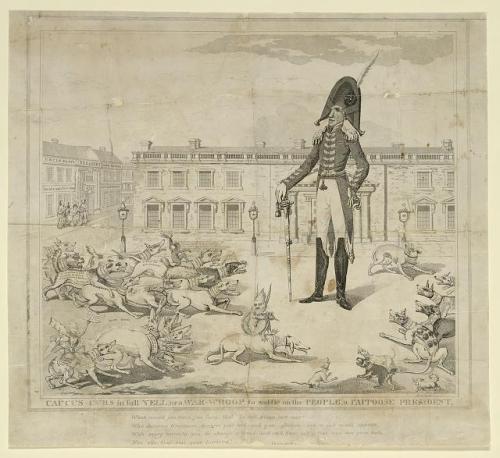 James Akin, Caucus curs in full yell, or a war whoop, to saddle on the people, a pappoose president (1824). General Andrew Jackson stands tall amidst a pack of dogs representing newspapers who supported the Congressional Caucus nominee William Crawford. Courtesy of the Library of Congress.

King Caucus had been attacked before. When it chose Monroe over William Crawford of Georgia in 1816, Crawford supporters and many northerners complained that Virginians used it to maintain their lock on the White House. But King Caucus had its share of defenders, who maintained that congressmen could best ascertain the preferences of partisans in their districts and states. John Taylor of Caroline, the prolific theorist of Jeffersonian democracy, argued that the caucus discouraged faction. But should it “ever attempt to control public opinion instead of expressing it, their doings would have little influence in the nation other than to embitter party animosity and to sharpen the edge of political strife.”

In 1824, King Caucus appeared to be doing just that. Monroe had identified no clear successor (his Vice-President, Daniel Tompkins of New York, was an insolvent alcoholic). Three eminent national figures – General Andrew Jackson of Tennessee, John Quincy Adams of Massachusetts, and Henry Clay of Kentucky intended to run regardless of what the caucus did, and their supporters assailed King Caucus as a vast conspiracy against the sovereignty of the people. Senator Rufus King, an Adams supporter, called it “a self-created central power … regulated by a sort of freemasonry, the sign and password of each at once placing the initiated in full confidence and communion with each other in all parts of the union.” Publisher Hezekiah Niles of Maryland, a Clay man, declared that “he would rather learn that the halls of Congress were converted into common brothels” than to see King Caucus convene within them.

Not surprisingly, the most intense attacks on King Caucus came from Jackson supporters, who began to organize popular local “conventions” for Old Hickory. Conventioneers carefully distinguished the caucus, a small and exclusive meeting of elites designed to direct public opinion, from the convention, an open meeting of the people designed to concentrate public opinion. The “period has surely arrived,” a Harrisburg, Pennsylvania convention declared, “when a president should be elected from the ranks of the people,” a president like Jackson, who came “pure, untrammeled, and unpledged, from the bosom of the people.” Such rhetoric solidified the outsider image of Jackson, a frontier military hero riding a wave of populist discontent unleashed by the financial panic of 1819.

All of this persuaded the great majority of congressmen to steer clear of the caucus. When it eventually met to nominate William Crawford, only 66 of 216 eligible members attended. King Caucus was dead.

Some observers heralded the killing of King Caucus as a triumph of public opinion over party machinery. But to more discerning political minds, it suggested that there could be no effective public opinion without party mechanisms that involved the ordinary voter, flattered his judgment, and fired his enthusiasm. The election of 1824 – and Jackson’s eventual triumph in 1828 – laid the groundwork for a “second party system” built upon precinct-by-precinct organization, popular conventions, and intense partisan feeling. Party establishments can be defeated; partisanship, not so much.

Mark G. Schmeller is an associate professor of history at Syracuse University. His latest book, Invisible Sovereign: Imagining Public Opinion from the Revolution to Reconstruction, examines the idea of public opinion and its transformation since the Revolutionary War.

Use promo code “HDPD” to receive a 30% discount when you order your copy of Invisible Sovereign.