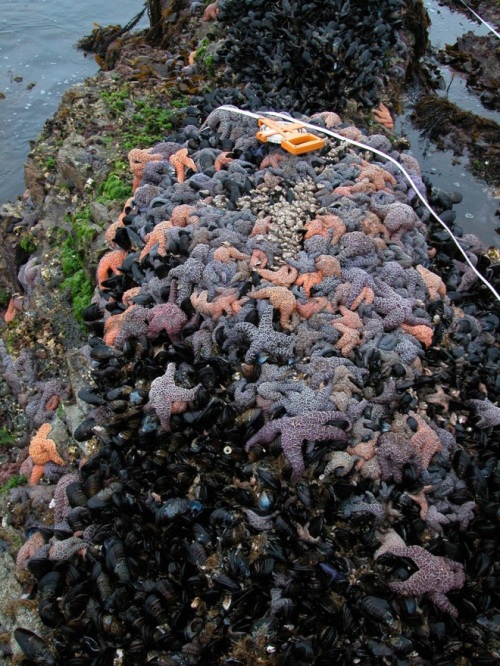 Starfish rarely receive widespread public notice. The explosion of populations of crown-of-thorns starfish (Acanthaster planci) on the Great Barrier Reef in the 1960s, which received world-wide attention, is an exception.

However, news of a major starfish die-off, which took place in southern California from 1983–1984, received little notice except among marine ecologists. More recently, though, a massive die-off—first noted in June 2013 along the coast of Washington state, then witnessed over a wide geographic area—was reported. Earlier this year,  a report on PBS NewsHour described a massive die-off of starfish on the Pacific coast of North America, bringing nationwide attention to the issue. In June, PBS revisited and updated the story.

The current massive die-off has been attributed to a wasting disease in which the external epithelium of the starfish develops lesions. Its tissue decays, its body fragments, and the starfish dies. Notably, the disease affects numerous starfish species, including Pisaster ochraceus, an important predator of the intertidal community.

The epidemiological basis for this massive die-off is lacking but its similarity to the sporadic disease-related mass mortality of the sea urchin (Strongylocentrotus droebachiensis) off the Atlantic coast of Canada is striking. Temperature plays a major role in the transmission of this sea urchin disease. It’s also been suggested that ocean currents and hydrodynamics affect the spread of the disease and its periodic occurrence.

Starfish are icons of the sea. But they are more than that. They have immense biological and ecological importance. They are key components of marine ecosystems that can impact humans.

John M. Lawrence is a professor of integrative biology at the University of South Florida and the editor of Starfish: Biology and Ecology of the Asteroidea.