Home
/
Biology
/
Enjoying nature in Maryland during the month of June 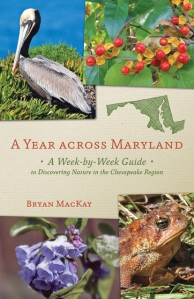 Summer Solstice here on the east coast occurred yesterday, June 21, at 12:39 p.m. To mark the official start of summer, we offer the following June excerpt from Bryan MacKay’s A Year across Maryland, his week-by-week guide to enjoying the natural world in JHUP’s home state.

The summer solstice brings this diminutive and easily-overlooked woodland plant into flower. Despite its unassuming nature, enchanter’s nightshade competes favorably with other wildflowers for the title of most evocative name. Enchanter’s nightshade is a member of the genus Circaea, named for the Greek goddess Circe. Circe was well known for her magical spells and potions. Supposedly, she used another species in this genus for such purposes, hence the word “enchanter’s.” The leaves of this species resemble leaves of the night shade family,  providing the rest of its common name. It is not in the nightshade family, however, and to my knowledge has not been used as a medicine or food. 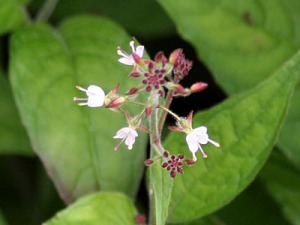 Enchanter’s nightshade grows on the forest floor in rich, slightly damp, well-shaded soil. The white flowers are tiny, less than a quarter inch in diameter, and grow on spikes (racemes) that rise above the egg-shaped leaves. The flowers have only two petals, an unusual characteristic shared by only one other genus of native wildflowers, the spurges. It’s worth a close look, even though few hikers even notice this modest plant. 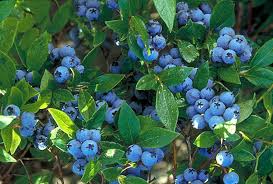 The long days of late June ripen blueberries, and long distance hikers on the Appalachian Trail in Maryland appreciate this tasty supplement to their spartan diets. Blueberries are a common ground cover on sandy,  nutrient-poor soils, whether they be on mountaintop ridges in the western part of the state or in pine-dominated forests on the coastal plain of the Eastern Shore. These are not the lush commercial berries you buy at the supermarket. Wild blueberries in this region are pea-sized and more tart than sweet.

Where to find wild blueberries this week:  Blueberries grow in many places in Maryland where there is dry soil. The Appalachian Trail has many miles of such ridgetop habitat.

Fireflies Light Up the Night 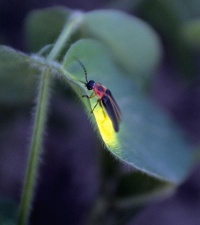 What is more magical than the glow of fireflies in the gloaming? Generations of kids have chased, captured, and observed these commonplace beetles and in the process become familiar, even enchanted, with the natural world. Fireflies don’t require wilderness. The suburban lawn seems to host very high densities of these animals with flashing lights on their abdomens. Although the first fireflies may appear by Memorial Day and persist well into July, late June seems to be the high point of their activity.

Where to see fireflies this week: Most suburban lawns host fireflies; you can even see some in grassy areas in cities. Densities seem greatest at the border between forest and lawn.

No natural place in Maryland may be more chaotic, noisy, and smelly than a nesting colony of brown pelicans. When adult birds arrive with fish to feed their young, the excited and raucous cries of these nestlings fill the air. Conditions in a colony are often crowded, and territorial squabbles are frequent. The smells of regurgitated fish, bird guano, and the occasional dead bird, all baking in the mid-summer sun, are pungent. A visit to a seabird nesting colony is a memorable experience. 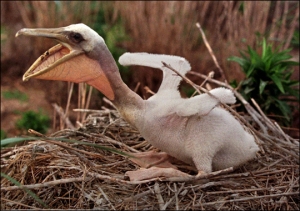 In the Chesapeake, our largest colonial nesting waterbird is the brown pelican. With a six-foot wingspan, few birds are more conspicuous and familiar to Maryland beachgoers. Most often seen as a line of birds cruising seemingly without effort just above the waves, these handsome birds are also notorious panhandlers dockside. Less often are pelicans seen feeding, but their headfirst plunge-dive into the ocean in search of fish is a dramatic sight.

Brown pelicans are fairly new to Maryland. Their numbers in the United States were decimated by organochlorine pesticides in the 1960s; the species was once even extinct in Louisiana, where it was (and is) the state bird. After DDT was banned in the United States, brown pelicans made an amazingly rapid recovery, reaching historic levels by 2000. As the population grew, birds on the Atlantic coast expanded their range northward above North Carolina, nesting for the first time in Maryland waters in 1987. In 2010, about 2,500 brown pelican chicks were banded on Bay islands near the Virginia border. By late summer, pelicans are a common sight at Ocean City, Maryland, and are now seen as far north as New Jersey.

Where to see nesting brown pelicans this week: While pelicans in flight and fishing in Maryland are easy to spot, nesting birds are found mostly on uninhabited islands in Chesapeake Bay. As of this writing, the largest colony is on Holland Island, but that will doubtless change, as Holland is being steadily eroded away. Nesting waterbirds are very susceptible to disturbance by humans, with very negative results, so observe the colonies with binoculars from a boat at least fifty feet offshore. Never go ashore; some birds would very likely die due to such an intrusion.

Bryan MacKay is a senior lecturer emeritus in the Department of Biological Sciences at the University of Maryland, Baltimore County. He is the author of A Year across Maryland: A Week-by-Week Guide to Discovering Nature in the Chesapeake Region; Hiking, Cycling, and Canoeing in Maryland: A Family Guide; and Baltimore Trails: A Guide for Hikers and Mountain Bikers.